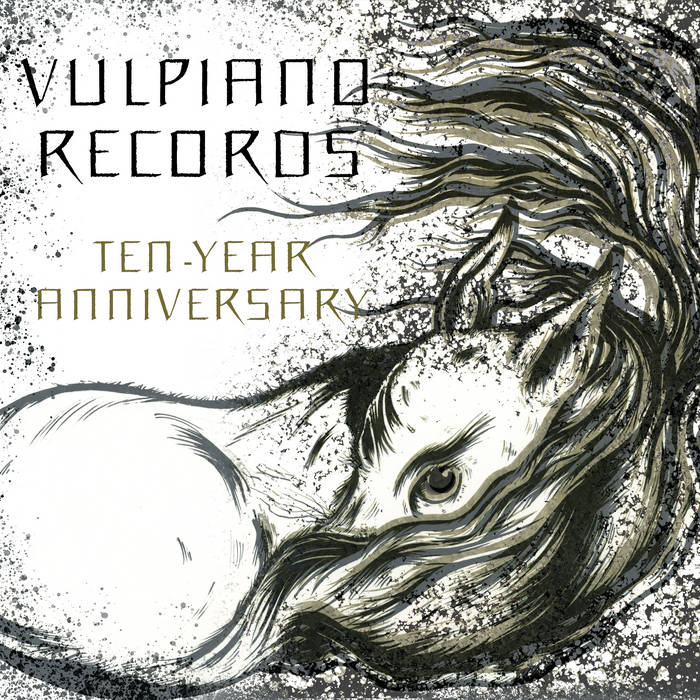 Levrikon I bought this one for the first new Natural Snow Buildings song in years. But the rest of the album is gorgeous as well. Slow, liquid ambience, melting in the back of your brain. Favorite track: Charles Thomas Tester.

Netlabel Vulpiano Records is celebrating its 10th anniversary with a cassette tape and digital compilation as a benefit for nonprofit digital library Internet Archive (archive.org). Limited to 100 copies and featuring exclusive and favorite tracks from the label's international roster of artists from Australia, England, France, Italy, Japan, Portugal, Russia, Spain, and the USA. Each cassette is hand-numbered and comes with either a holographic tarot card (78 copies) or an Artist Trading Card collage on a playing card (22 copies), selected randomly. The genre-spanning release celebrates the musically diverse and collaborative spirit of the long-running label with selections in drone, folk, electronic, and more.

For a label founded on a Creative Commons ethos, Internet Archive has long been an indispensable host for Vulpiano: a place for our artists’ work to be free to download, share, copy and redistribute.

Delicasession's "Soar (SA90 Edit)" (Previously released on Soar)
Settling into corporeal motion, we roam at a trot into the unknown, with synth and string voices in ruminative dialogue.
soundcloud.com/delicasession
twitter.com/delicasession

ish10 yow1r0's "in a chilly night, gently hug me" (Cassette exclusive)
A concrete jungle at dusk, where many feet splash reflective puddles. 2-step beats skitter through nearby headphones and intimacy is seemingly always out of reach.
soundcloud.com/yow-is
twitter.com/yow6969_yow

Brevyn's "Voltage" (Cassette exclusive)
Ravers from a nearby club stream past us at a concourse; elevated trains and powerlines thrum overhead as the night city awakens.
brev.bandcamp.com
twitter.com/voicesontheair/

Anton Rothschild's "Wednesday" (Cassette exclusive)
Turning away and walking, as we are, beneath a waning autumn moon, we divine a poetic ode to a melancholic friend.
soundcloud.com/antonrothschild
antonrothschild.bandcamp.com/releases

Zapa's "Ghosts" (Previously released on The Long Trick)
The scent of fallen pine needles drift on the air; a nomadic soul nurses a glass before slinking back into the crowd, a plaintive blues can be heard.
miguelzapata.net
soundcloud.com/mzapa

Neurotic Wreck's "Funeral of Roses" (Cassette exclusive)
Environment is history, and endless spiritual murder and renewal saturates the ground on which we trudge: the kick drum procession ushers on…
neuroticwreck.bandcamp.com/music
dan-wreck.tumblr.com

Enrico Falbo's "Raga Tyaga" (Cassette exclusive)
At a deep and solitary loch high in the icy steppes: the reed-drones of a distant valley reaching us on the wind, perhaps illusory.
www.facebook.com/Enrico-Falbo-109159652446319/
soundcloud.com/enrico-falbo

Taker 51's "Marte" (Cassette exclusive)
In an earlier spacetime, this trance-signal is transmitted via a TV composer’s home studio, perhaps demoed with intent to include on a space-themed rock musical.
taker51.bandcamp.com
www.facebook.com/Taker51/

Derek Piotr's "Witness" (Cassette exclusive)
Once the future is alive and palpable we now refract it through our senses. Tones, glitches and alerts, deconstructions on the other side of the cyberpunk looking glass.
derekpiotr.com
soundcloud.com/derek-piotr

Whalt Thisney's "Man Walking" (Cassette exclusive)
The fog conveys us to the end, the beginning, and the ambiguous iridescence.
walthisney.bandcamp.com
twitter.com/WalThisney

Special thanks to Anton Rothschild and Miguel Zapata for their contributions in support of the cassette production, Jinsie Preiss, Nicholas van der Waard, and Brevyn's feedback in the mixing and mastering process, and the support of listeners and Vulpiano artists all these years.